A new report commissioned by Cork Chamber and the Construction Industry Federation (CIF) and produced by EY-DKM Economic Advisory has found that the cost of construction of new apartments is significantly beyond viability and is threatening future economic growth in Ireland’s cities.

Using real cost appraisals for four different apartment schemes across Cork by leading national developers, the report found that the physical or “hard” costs of an apartment typically equate to just 48%-56% of the overall construction costs. Meanwhile, the economic impact assessment found that 30% of the total sales price of a new apartment goes directly to the State.

The report finds that the total delivery cost of a new apartment drives a sales price far above what a first-time buyer working couple can afford. The same can be said for rents which would need to be set at unsustainably high levels for new build-to-rent schemes to be viable.

When looking at the viability of built-to-rent apartments, the report found that the average monthly rent would need to be €2,500 for a two-bedroom apartment in Cork city and €3,000 for a three-bed apartment in order to ensure viability.

The Government’s Ireland 2040 project predicts Cork Metropolitan Area’s workforce will grow by 65,000 by 2031, but both Cork Chamber and CIF are warning that the ability to accommodate these new workers in a compact city will be challenging until the viability issue is addressed. An estimated 97% of all apartments built in Cork were built before 2010.

Cork Chamber CEO Conor Healy says, “Apartment building has emerged as the number one issue for our members as they look to the future. As Ireland’s fastest growing city, Cork needs 27,300 new housing units by 2031 to meet growth targets. We know that as many as 19,000 housing units could be built on zoned lands across the city. However, new homes have to be affordable. The Ireland 2040 plan sets out an exciting blueprint for growth, but that growth cannot happen without addressing costs and closing the viability gap that has been clearly identified, and that is holding back apartment development across Irish cities.”

Author of the report, Annette Hughes, Director at EY-DKM Economic Advisory, commented: “Our analysis shows that the housing supply shortage Cork is facing could present a major obstacle to future employment, economic growth and FDI, as well as to regional tourism and the quality of life in Cork city and the wider region. The unintended consequences that emerge on the back of a lack of viable housing in the city impact Ireland’s competitiveness and notably, our ability to accommodate relocations as a result of Brexit. Importantly, these ramifications are not conducive to encouraging people to migrate to cities outside of Dublin, which is a key priority for Government in line with Project Ireland 2040.”

CIF spokesman Conor O’Connell says costs outside of developers’ control are having a significant impact; “The current cost of delivery means that it is not possible to construct affordable new city centre apartments for the average renter or buyer. Unless the total cost of apartment delivery comes down, new apartments will remain un-viable and developers will not be able to build housing that satisfies demand in local markets. A third of the final price the buyer pays goes directly to the State and is outside the control of developers. If the cost of delivery was reduced to start work on 1,000 new apartment units, it would lead to the creation of 3,400 jobs annual and contribute €137 million in additional Exchequer revenues. Such an action would also help provide sustainable development across the country.”

To deliver on Ireland 2040, the report by EY-DKM Economic Advisory recommends a total of 16 actions, including;
In advance of Budget 2020, Cork Chamber and the CIF are consulting widely with Government, local authorities and elected representatives to highlight the implications of this viability gap for all of Ireland’s cities.

Conor Healy added “Ireland 2040 will not be delivered upon unless this viability gap is bridged and we need immediate government action. We have to build apartments where prices reflect the reality of the salaries of the people living in them and the growing demand for city centre living. Only then, can we achieve the goal of sustainable, vibrant and less car-dependent cities.” 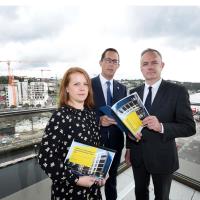 This site uses cookies. By continuing to browse the site, you are agreeing to our use of cookies.